Liquefied Petroleum Gas (LPG or LP Gas), also referred to as simply “Propane” or “Butane”, are flammable mixtures of Hydrocarbon Gases used as fuel in heating appliances, cooking equipment, and vehicles. It is increasingly used as an aerosol propellant and a refrigerant replacing Chlorofluorocarbones (CFCs). It is in an effort to reduce damage to the Ozone (O3) layer. When specifically used as a vehicle fuel it is often referred to as autogas.

Varieties of LPG bought and sold include mixes that are mostly Propane mostly Butane. Commonly, mixes include both Propane and Butane. In summer they contain more Propene or Propylene (CH3CH=CH2) Butene or Butylenes (C4H8) and various other Hydrocarbones are usually also present in small concentrations such as C2H6 , CH4, and C3H8. HD–5 limits the amount of propylene that can be placed in LPG to 5%, and utilized as an autogas specification. A powerful odorant, Ethanethiol (CH3CH2SH), is added so that leaks can be detected easily. The internationally recognized Standard is EN 589. In the United States,  States, tetrahydrothiophene (thiophane) or amyl mercaptan are also approved odorants, although neither is currently being utilized. 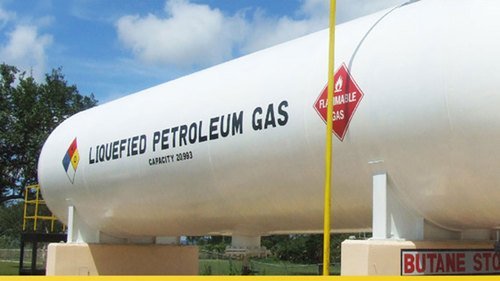 LPG is prepared by refining petroleum or “wet” natural gas. It is almost entirely derived from fossil oil sources, being manufactured during the refining of petroleum (Crude Oil). LPG extracted from petroleum or natural gas streams as they emerge from the ground. LPG is used for cooking in many countries for economic reasons, for convenience or because it is the preferred fuel source.

In India, nearly 8.9 million tons of LPG was consumed in the six months. Predominantly in Europe and rural parts of many countries, LPG can provide an alternative to electric heating, heating oil, or Kerosene. LPG is most often used in areas that do not have direct access to piped natural gas. LPG can be used as a power source for combined heat and power technologies (CHP). CHP is the process of generating both electrical power and useful heat from a single fuel source. This technology has allowed LPG to be used not just as fuel for heating and cooking, but also for decentralized generation of electricity.

LPG can be stored in a variety of manners. LPG, as with other fossil fuels, can be combined with renewable power sources to provide greater reliability while still achieving some reduction in CO2 emissions. However, as opposed to wind and solar renewable energy sources, LPG can be used as a standalone energy source without the prohibitive expense of electrical energy storage. In many climates renewable sources such as solar energy and wind power would still require the construction, installation and maintenance of reliable base load power sources such as LPG fueled generation to provide electrical power during the entire year.

It currently provides about 3% of all energy consumed. Liquefied petroleum gas burns relatively cleanly with no soot and very few sulfur emissions. As it is a gas, it does not pose ground or water pollution hazards, but it can cause air pollution. LPG has a typical specific caloric value of 46.1 MJ/kg compared with 42.5 MJ/kg. for fuel oil and 43.5 MJ/kg for premium grade petrol (Gasoline). However, its energy density per volume unit of 26 MJ/L is lower than either that of petrol or fuel oil, as it is relative density is lower (about 0.5 – 0.58 Kg/L, compare to 0.71 – 0.77 Kg/L for gasoline. As its boiling point is below room temperature, LPG will evaporate quickly at normal temperature and pressures. It is usually supplied in pressurized vessels. Besides using as energy carrier, the LPG is also a promising feedstock in the chemical industry for the synthesis of olefins such as ethylene (C2H4 or H2C=CH2), propylene, butene as well as acrylic acid (CH2=CHCOOH). LPG is heavier than air, unlike natural gas, and thus will flow along floors and tend to settle in low spots, such as basements. There are two main dangers to this. The first is a possible explosion if the mixture of LPG and air is within the explosive limits and there is an ignition source. The second is suffocation due to LPG displacing air, causing a decrease in oxygen concentration.