Edible oils and fats are oils extracted from seeds or less often, from other parts of fruits. Like animal fats, vegetable fats are mixtures of triglycerides. Soybean oil, grape seed oil, and cocoa butter are examples of fats from seeds. Olive oil, palm oil, and rice bran oil are examples of fats from other parts of fruits. In common usage, vegetable oil may refer exclusively to vegetable fats which are liquid at room temperature. Vegetable oils are usually edible; non–edible oils derived mainly from petroleum are termed mineral oils.

Knowing the source of cooking fats and oils is as important as knowing how they are made.

Saturated fats are mostly found in animal products such as butter, cheese, whole milk, ice cream, lard and fatty meats. They are also found in some vegetable products, such as coconut, palm and palm kernel oil. Saturated fats are solid at room temperature.

Unsaturated fats come from both animal and plant products. There are two types:

Try to limit foods made with these ingredients. Trans fats can raise your cholesterol. While some fats are healthier than others, limit added fats and oils to three to six teaspoons each day. Include fats used in cooking, baking, salads, and spreads on bread.

How to choose cooking fats and oils:

There are so many cooking fats and oils on the market– choosing which one to use can be difficult! Which ones are most healthful for you when used in moderation?

Edible Oils and fats extracted from plants have been used since ancient times and in many cultures. In addition to use as food, fats and oils (both vegetable and mineral) have long been used as fuel, typically in lamps which were a principal source of illumination in ancient times. Oils may have been used for lubrication, but there is no evidence for this. Edible oils and fats were probably more valuable as food and lamp oil; mineral oil was known to be used as fuel, but there are no references to lubrication.

Many vegetable oils and fats are consumed directly, or indirectly as ingredients in food – a role that they share with some animal fats, including butter, ghee, lard and schmaltz. The oils serve a number of purposes in this role:

Oils can be heated to temperatures significantly higher than the boiling point of water, 100 °C (212 °F), and used to cook foods like frying. Oils for this purpose must have a high flash point. Such oils include the major cooking oils – Soybean, Rapeseed, Canola, Sunflower, Safflower, Peanut, Cottonseed, etc. Tropical oils, such as coconut, palm and rice bran oils, are particularly valued in Asian cultures for high–temperature cooking, because of their unusually high flash points.

Unsaturated vegetable oils and fats can be transformed through partial or complete “hydrogenation” into oils of higher melting point. The hydrogenation process involves “sparging” the oil at high temperature and pressure with hydrogen in the presence of a catalyst, typically a powdered nickel compound. As each carbon–carbon double–bond is chemically reduced to a single bond, two hydrogen atoms each form single bonds with the two carbon atoms. The elimination of double bonds by adding hydrogen atoms is called saturation, as the degree of saturation increases, the oil progresses toward being fully hydrogenated. An oil may be hydrogenated to increase resistance to rancidity (oxidation) or to change its physical characteristics. As the degree of saturation increases, the oil’s viscosity and melting point increase. 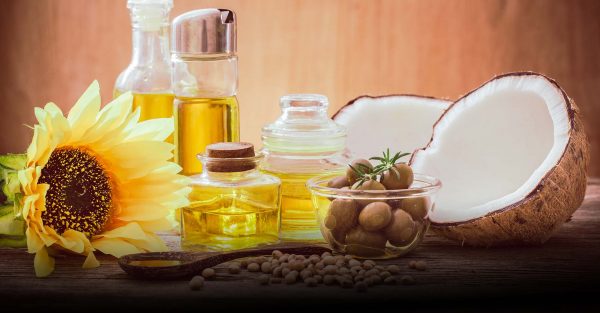 Vegetable oils and fats are used as an ingredient or component in many manufactured products. Many vegetable oils are used to make soaps, skin products, candles, perfumes and other personal care and cosmetic products. Some oils are particularly suitable as drying oils, and are used in making paints and other wood treatment products. Dammar oil (a mixture of linseed oil and dammar resin), for example, is used almost exclusively in treating the hulls of wooden boats. Vegetable oils are increasingly being used in the electrical industry as insulators as vegetable oils are not toxic to the environment, biodegradable if spilled and have high flash and fire points. However, vegetable oils are less stable chemically, so they are generally used in systems where they are not exposed to oxygen, and they are more expensive than crude oil distillate. Synthetic tetraesters, which are similar to vegetable oils but with four fatty acid chains compared to the normal three found in a natural ester, are manufactured by Fischer esterification.  Tetraesters generally have high stability to oxidation and have found use as engine lubricants. Vegetable oil is being used to produce biodegradable hydraulic fluid and lubricant.

One limiting factor in industrial uses of edible oils and fats are that all such oils are susceptible to becoming rancid. Oils that are more stable, such as ben oil or mineral oil, are thus preferred for industrial uses. Castor oil has numerous industrial uses, owing to the presence of hydroxyl group on the fatty acid. Castor oil is a precursor to Nylon 11.

Edible oils and fats are used in the production of some pet foods. Association of American Feed Control Officials (AAFCO) defines vegetable oil, in this context, as the “product of vegetable origin obtained by extracting the oil from seeds or fruits which are processed for edible purposes”.

Edible oils and fats are also used to make biodiesel, which can be used like conventional diesel. Some vegetable oil blends are used in unmodified vehicles but straight vegetable oil, also known as pure plant oil, needs specially prepared vehicles which have a method of heating the oil to reduce its viscosity. The use of vegetable oils as alternative energy is growing and the availability of biodiesel around the world is increasing.

Edible oils and fats can be removed via mechanical extraction, termed “Crushing” or “Pressing”. This method is typically used to produce the more traditional oils (e.g., olive, coconut etc.), and it is preferred by most “health–food” customers in the United States and in Europe. There are several different types of mechanical extraction. Expeller–pressing extraction is common, though the screw press, ram press, and ghani (powered mortar and pestle) are also used. Oilseed presses are commonly used in developing countries, among people for whom other extraction methods would be prohibitively expensive; the ghani is primarily used in India.

The processing of vegetable oil in commercial applications is commonly done by chemical extraction, using solvent extracts, which produces higher yields and is quicker and less expensive. The most common solvent is petroleum–derived hexane. This technique is used for most of the “newer” industrial oils such as soybean and corn oils. After extraction, the solvent is evaporated out by heating the mixture to about 149 ºC (300 ºF).

Supercritical carbon dioxide can be used as a non–toxic alternative to other solvents.

Edible oils and fats may be partially hydrogenated to produce various ingredient oils. Lightly hydrogenated oils have very similar physical characteristics to regular soy oil, but are more resistant to becoming rancid. Margarine oils need to be mostly solid at 32 °C (90 °F) so that the margarine does not melt in warm rooms, yet it needs to be completely liquid at 37 °C (98 °F), so that it doesn’t leave a “lardy” taste in the mouth. Hardening vegetable oil is done by raising a blend of vegetable oil and a catalyst in near–vacuum to very high temperatures, and introducing hydrogen. This causes the carbon atoms of the oil to break double–bonds with other carbons, each carbon forming a new single–bond with a hydrogen atom. Adding these hydrogen atoms to the oil makes it more solid, raises the smoke point, and makes the oil more stable.

Hydrogenated edible oils differ in two major ways from other oils which are equally saturated. During hydrogenation, it is easier for hydrogen to come into contact with the fatty acids on the end of the triglyceride, and less easy for them to come into contact with the center fatty acid. This makes the resulting fat more brittle than tropical oil; soy margarines are less “spreadable”. The other difference is that trans fatty acids (often called trans fat) are formed in the hydrogenation reactor, and may amount to as much as 40% by weight of a partially hydrogenated oil. Hydrogenated oils, especially partially hydrogenated oils with their higher amounts of trans fatty acids, are increasingly thought to be unhealthy.

In the processing of edible oils, the oil is heated under vacuum to near the smoke point or to about 232 ºC (450 ºF), and water is introduced at the bottom of the oil. The water immediately is converted to steam, which bubbles through the oil, carrying with it any chemicals which are water–soluble. The steam sparging removes impurities that can impart unwanted flavors and odors to the oil. Deodorization is key to the manufacture of vegetable oils. Nearly all soybean, corn, and canola oils found on supermarket shelves go through a deodorization stage that removes trace amounts of odors and flavors, and lightens the color of the oil.

Other significant triglyceride oils include:

Corn oil is one of the most common cooking oils. Corn oil is used for cooking, salad dressing, margarine, mayonnaise, prepared goods like spaghetti sauce and baking mixes, potato chips and French fries. 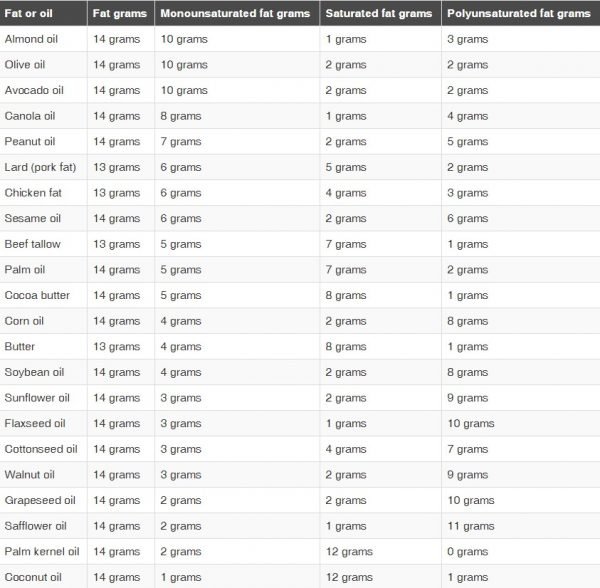 A large quantity of used vegetable oil is produced and recycled, mainly from industrial deep fryers in potato processing plants, snack food factories and fast food restaurants. Recycled oil has numerous uses, including use as a direct fuel, as well as in the production of biodiesel, soap, animal feed, pet food, detergent, and cosmetics. It is traded as the commodity, yellow grease.

Due to their susceptibility to oxidation from the exposure to oxygen, heat and light, resulting in the formation of oxidation products, such as peroxides and hydroperoxides. Plant oils rich in polyunsaturated fatty acids have a limited shelf–life.

In Canada, palm oil is one of five vegetable oils, along with palm kernel oil, coconut oil, peanut oil, and cocoa butter, which must be specifically named in the list of ingredients for a food product.  Also, oils in Canadian food products which have been modified or hydrogenated must contain the word “modified” or “hydrogenated” when listed as an ingredient. A mix of oils other than the aforementioned exceptions may simply be listed as “vegetable oil” in Canada; however, if the food product is a cooking oil, salad oil or table oil, the type of oil must be specified and listing “vegetable oil or edible oil” as an ingredient is not acceptable.

From December 2014, all food products produced in the European Union were legally required to indicate the specific vegetable oil used in their manufacture, following the introduction of the Food Information to Consumers Regulation.