Also known as Petcoke or coke, it is a carbon (C) – rich solid material that is derived from oil refining. Petcoke is processed from the final cracking process–a thermo-based chemical engineering process that splits long chain of Hydrocarbons of Petroleum into shorter chains—that takes place in units termed Coker units. (Other types of coke are derived from coal). 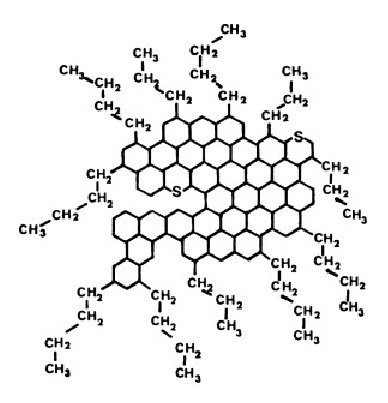 Stated succinctly, coke is the “Carbonization product of high–boiling hydrocarbon fractions obtained in petroleum processing (heavy residues).” Petcoke is also produced in the production of synthetic crude oil, or Syncrude from bitumen extracted from oil sands.

In petroleum Coker units, residual oils from other distillation processes used in petroleum refining are treated at a high temperature and pressure leaving the petcoke after driving off gases and volatiles and separating off  the remaining light and heavy oils. These processes are termed “coking processes”, and most typically employ chemical engineering plant operations for the specific process of delayed coking.

This coke can either be fuel grade (High in sulfur (S) and metals) or anode grade (Low in sulfur and metals). The raw coke directly out of the coker is often referred to as “Green Coke“. In this context, “Green” means raw or unprocessed. The further processing of green coke by calcining in a rotary kiln removes residual volatile hydrocarbons from the coke. The calcined petroleum coke can be further processed in an anode baking oven in order to produce anode coke of the desired shape and physical properties. The anodes are mainly used in the Aluminum (Al) and Steel industry.

There are at least four basic types of Petroleum Coke, namely as, (1) “Needle Coke”, (2) “Honeycomb Coke”, (3) “Sponge Coke” and (4) “Shot Coke”. Different types of Petroleum Coke have different micro structures due to differences in operating variables and nature of feedstock. Significant differences are also to be observed in the properties of the different types of coke, particularly ash and volatile matter contents.

Needle coke, also called Acicular Coke, is a highly Crystalline Petroleum Coke. It is used in the production of electrodes for the steel and aluminum (Al) industries. It is particularly valuable because the electrodes must be replaced regularly. Needle coke is produced exclusively from either Fluid Catalytic Cracking (FCC) decant oil or coal tar pitch.

Honeycomb coke is an intermediate coke, with ellipsoidal pores that are uniformly distributed. Compared to needle coke, honeycomb coke has a lower coefficient of thermal expansion and a lower electrical conductivity.

Green Petroleum Coke is obtained from processing liquid fractions in Delayed Coking Units (DCR). It is a material with high fixed carbon content comprising of hydrocarbons and low levels of inorganic compounds. Its appearance is that of a bulk composed of solid black fragments, and the term “Green” in its name refers to the stage of its production process. Petcoke in its raw (Green Coke) Nitrogen (N) at 0.1% – 0.5% and sulfur 0.2 % – 6.0% become emissions after the coke calcined.

The main differential between Green Petroleum Coke and Regular Pet Coke is its low sulfur content which is rare worldwide. Therefore, it has a higher value added due to leaving a lower environmental footprint.

There are two types of Green Coke; “Anode Grade” or “Metallurgical Grade”.

Anode Grade Coke is an essential input to obtain Calcined Coke, which is used to manufacture Anodes to produce Aluminum or Titanium Dioxide (TiO2).

Steel grade Coke, meanwhile, is used as a reducing agent in Iron (Fe) and Steel Metallurgy. It serves the pelletizing and carbide production segments; additionally, it is used to obtain lime and for other industrial applications.