Refined Sunflower Oil is the Non–Volatile oil compressed from the seeds of Sunflower plant. It is commonly used in food as Frying Oil, and in cosmetic formulations as an Emollient. It is a Monounsaturated/Polyunsaturated mixture of mostly Oleic Acid (CH3(CH2)7CH=CH(CH2)7COOH) (Omega–9 fatty acid) Linoleic Acid (COOH(CH2)7CH=CHCH2CH=CH(CH2)4CH3) (Omega–6 fatty acid) group of Oils. The oil content of the seed ranges from 22% to 36% (average 28%); the kernel contains 45–55% oil. The expressed oil is of Light Amber color with a mild and pleasant flavor; refined oil is pale yellow. Refining losses are low and the oil has good keeping qualities with light tendency for flavor reversion. The refined sunflower oil contains appreciable qualities of vitamin E, Sterols (C17H28O), Squalene ((C5H8)6), and other Aliphatic Hydrocarbons.

Sunflower oil is mainly a triglyceride; a typical constituent is shown below:

Sunflower oil contains several compounds that have benefits for skin. They include:

Sunflower oil is a non–comedogenic carrier oil which is highly absorbent, and won’t clog pores. It’s non-irritating for most people, and can be used on all types of skin, including dry, normal, oily, and acne-prone.

Vitamin E is an antioxidant that can help protect skin from free radicals and from adverse effects of the sun, such as premature aging and wrinkles. Using a skincare product formulated with sunflower oil is a good way to obtain vitamin E’s benefits for skin. Eating foods prepared with sunflower oil is another way, although there are other plant oils, such as olive oil, that may be more beneficial nutritionally.

Sunflowers are one of the few crops native to the United States. According to some sources, indigenous people likely began to cultivate them around 1000 BC. Sunflower Seeds probably didn’t reach Europe until the 1800s. When sunflower seeds arrived in Russia, their oil content interested farmers. The farmers selectively bred the plants until they almost doubled the oil content of the seeds.

Today, Sunflower Oil is a food, a medicine, and a skin treatment. It is available in several forms, each with a different formula and with its own health benefits. Sunflower oil is a popular vegetable oil in the kitchen because of its mild flavor and high smoke point.

One tablespoon of sunflower oil contains:

Sunflower oil is also a good source of these vitamins: 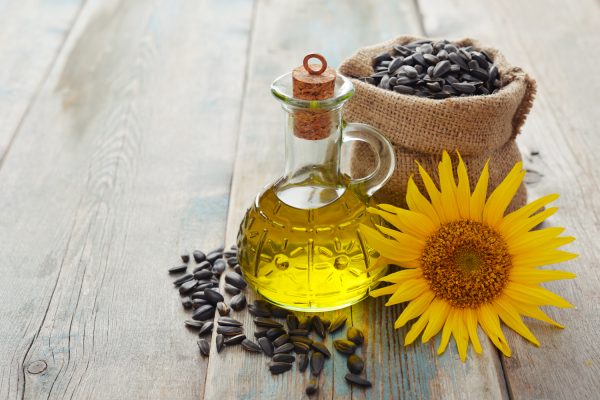 1. Promotes heart health: Sunflower oil contains Phytochemicals such as Choline and phenolic acid, which studies have found to be beneficial for the heart. Furthermore, it’s naturally free from trans fats, which is associated with an increased risk of developing heart disease.

2. Provides energy: Sunflower oil is loaded with monounsaturated and polyunsaturated fats which provide the body with a good source of fuel.

3. Lowers cholesterol: Research shows that including sunflower oil in the diet can effectively lower our total cholesterol levels as well as the build–up of ‘bad’ low–density lipoprotein (LDL) cholesterol.

4. Strengthens the immune system: Sunflower oil’s antioxidant properties strengthen the cell membranes, making it harder for bacteria and viruses to enter the body. In addition, this increases our ability to fight off infections.

5. Improves digestion: As sunflower oil is extremely light, it is better absorbed in your digestive tract than many other oils. It also acts as a mild laxative, which can help with constipation.

6. Repairs the body: Sunflower oil contains proteins that help in building and repairing the tissues and enzymes required for the healthy functioning of the body’s systems. 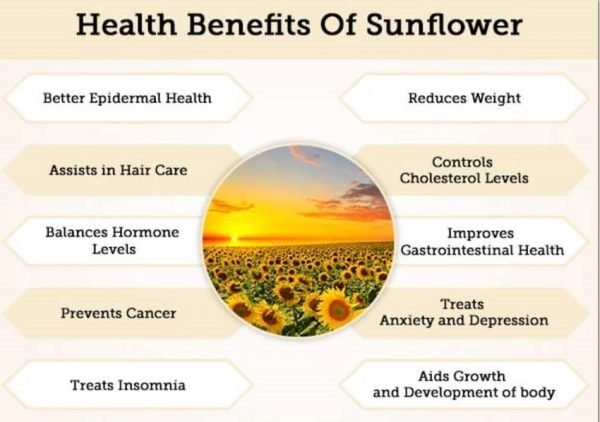 Sunflower oil is great multi–purpose cooking oil as it can withstand high temperatures (it has a smoke point of 230 °C (446 ºF).) It is light amber in color with a subtle nutty taste, making it perfect for both deep–frying vegetables and shallow–frying steaks and fish. It can also be used as a substitute for butter when baking cakes and muffins.

Because of its emollient properties, sunflower oil is often included as an ingredient in many cosmetics and medicines. Being rich in nutrients and antioxidants, it is effective in fighting acne, eczema (Dermatitis), inflammation and general redness and irritation of the skin. Its high vitamin E levels also help to neutralize free-radicals and slow ageing.

Sunflower oil is incredibly nourishing for the hair and can preventing thinning, control frizz and combat dryness and damage. It can be applied directly to the scalp as a moisturizing treatment or added to your regular shampoo and conditioner.

Because refined sunflower oil is primarily composed of less–stable polyunsaturated and monounsaturated fatty acids. It can be particularly susceptible to degradation by heat, air and light. It triggers and accelerates oxidation. Keeping it at low temperatures during manufacture and storage can help minimize rancidity and nutrient loss. The storage in bottles is made of either darkly colored glass or plastic that has been treated with an ultraviolet light protectant.