Liquefied Natural Gas (LNG) is a natural gas (predominantly Methane (CH4), with some mixture of Ethane (C2H6). It has been cooled down to liquid form for ease and safety of non–pressurized storage or transport. It is (1) Odorless, (2) Colorless, (3) Non–toxic and (4) Non–corrosive. It’s hazards include (1) Flammability after vaporization into a gaseous state, (2) Freezing, (3) Asphyxia. The liquefaction process involves removal of certain components, such as (1) Dust, (2) Acid gases, (3) Helium, (4) Water, and (5) Heavy Hydrocarbons, which could cause difficulty downstream. The natural gas is then condensed into a liquid at close to atmospheric pressure by cooling it to approximately −162 °C (−260 °F); maximum transport pressure is set at around 25 kPa (4 psi). 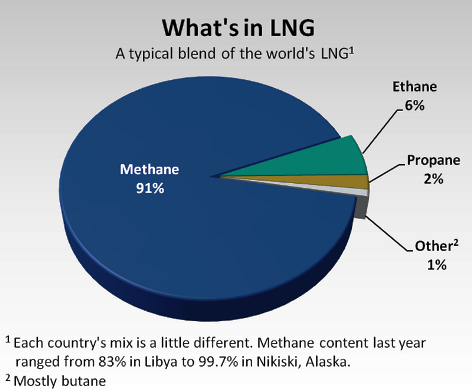 Natural gas is mainly converted to LNG for transport over the seas. It is where laying pipelines is not feasible technically and economically. LNG achieves a higher reduction in volume than Compressed Natural Gas (CNG) so that the (volumetric) energy density of LNG is 2.4 times greater than that of CNG (at 250 bar) or 60 percent that of diesel fuel. This makes LNG cost efficient in marine transport over long distances. However, CNG carrier ships can be used economically up to medium distances in marine transport. Specially designed cryogenic sea vessels (LNG carriers) or cryogenic road tankers are used for LNG transport.

LNG is principally used for transporting natural gas to markets, where it is regasified and distributed as pipeline natural gas. It can be used in natural gas vehicle, although it is more common to design vehicles to use CNG. LNG’s relatively high cost of production and the need to store it in expensive cryogenic tanks have hindered widespread commercial use. Despite these drawbacks, on energy basis LNG production is expected to hit 10% of the global crude production by 2020. The heating value depends on the source of gas that is used and the process that is used to liquefy the gas. The range of heating value can span +/- 10 to 15%. A typical value of the higher heating value of LNG is approximately 50 MJ/kg or 21,500 BTU/lb.

The gas produced from hydrocarbon deposits typically contains a wide range of hydrocarbon products, which usually includes Methane (CH4), Ethane (C2H6), Propane (C3H8) and Butane (C4H10). All these products have wide–ranging boiling points and also different heating values allowing different routes to commercialization and also different uses. The “acidic” elements such as hydrogen Sulphide (H2S) and carbon dioxide (CO2), together with oil, mud, water, and mercury, are removed from the gas to deliver a clean sweetened stream of gas. Failure to remove such acidic molecules, Mercury (Hg), and other impurities could result in damage to the equipment. Corrosion of steel pipes and amalgamization of mercury to aluminum within cryogenic heat exchangers could cause expensive damage.

The gas stream is typically separated into the Liquefied Petroleum fractions (butane and propane), which can be stored in liquid form at relatively low pressure, and the lighter Ethane and Methane fractions. These lighter fractions of methane and ethane are then liquefied to make up the bulk of LNG that is shipped.

Natural gas was considered to be economically unimportant wherever gas–producing oil or gas fields were distant from gas pipelines or located in offshore locations where pipelines were not viable. In the past this usually meant that natural gas produced was typically flared, especially since unlike oil no viable method for natural gas storage or transport existed other than pipelines which required the immediate use by end users of the same gas. This meant that natural gas markets were historically entirely local and any production had to be consumed within the local network.