Naphtha is a flammable liquid hydrocarbon mixture. Mixtures labeled Napththa have been produced from natural gas condensates, petroleum distillates, and the distillation of coal tar and peat.

In different industries and regions “Naphtha” may also be crude oil or refined products such as kerosene. Mineral spirits, also historically known as “naphtha”, is not the same chemical. Nephi and Naphthar are sometimes used as a synonym. White gas, exemplified by Coleman Camp Fuel, is a common naphtha–based fuel used in many lanterns and torches. 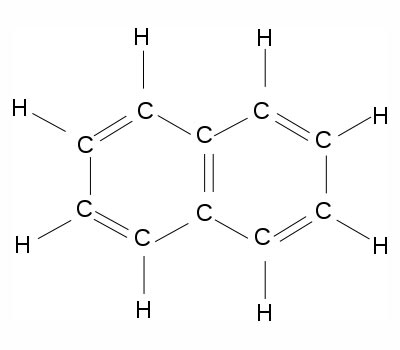 It is the most abundant single component of coal tar. Although the composition of coal tar varies with the coal from which it is produced, typical coal tar is about 10% of it by weight. In industrial practice, distillation of coal tar yields an oil containing about 50% naphthalene, along with twelve other aromatic compounds.

This oil, after being washed with Aqueous Sodium Hydroxide (NaOH) to remove acidic components (chiefly various Phenols (C6H5OH), and with Sulfuric Acid (H2SO4) to remove basic components, undergoes fractional distillation to isolate it. The Crude Naphthalene resulting from this process is about 95% Naphthalene (C10H8) by weight.

The chief impurities are the Sulfur (S) – containing aromatic compound Benzothiophene (C8H6S) (<2%), Indane (C6H4(CH2)3) (0.2%), Indene (C9H8) (<2%), and Methylnaphthalene (CH3C10H7) (<2%). Petroleum–derived naphthalene is usually purer than that derived from coal tar. Where required, crude naphthalene can be further purified by crystallization from any of a variety of solvents, resulting in 99% naphthalene by weight, referred to as 80°C (melting point). Approximately 1.3 million tons are produced annually.

Various qualifiers have been added to the term “Naphtha” by different sources in an effort to make it more specific:

Another source differentiates light and heavy comments on the hydrocarbon structure, but offers a less precise dividing line:

Light is a mixture consisting mainly of straight – chained and cyclic aliphatic hydrocarbons having from five to six carbon atoms per molecule.

Heavy is a mixture consisting mainly of straight – chained and cyclic aliphatic hydrocarbons having from seven to nine carbon atoms per molecule.

Both of these are useful definitions, but they are incompatible with one another and the latter does not provide for mixes containing both six and seven carbon atoms per molecule. These terms are also sufficiently broad that they are not widely useful. 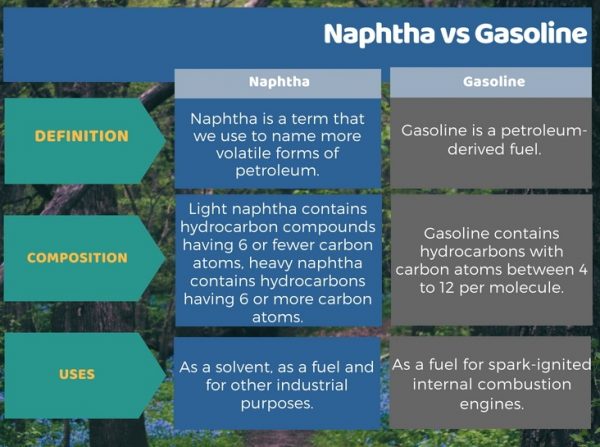 Naphtha is used mainly as a precursor to other chemicals. The single largest use is the industrial production of Phthalic Anhydried, although more Phthalic Anhydride (C6H4(CO)2O) is made from O–Xylene (C6H4(CH3)2).

Naphtha is used to dilute heavy crude oil to reduce its viscosity and enable/facilitate transport; undiluted heavy crude cannot normally be transported by pipeline, and may also be difficult to pump onto oil tankers. Other common dilatants include natural gas condensate and light crude. However, naphtha is a particularly efficient dilutant and can be recycled from diluted heavy crude after transport and processing. The importance of oil dilutants has increased as global production of lighter crude oils has fallen and shifted to exploitation of heavier reserves.

Light naphtha is used as a fuel in some commercial applications. One notable example is wick – based cigarette lighters, such as the Zippo, which draw “lighter fluid” – naphtha – into a wick from a reservoir to be ignited using the flint and wheel.

It is also a fuel for camping stoves and oil lanterns, known as “white gas”, where naphtha’s low boiling point making it easy to ignite. Naphtha is sometimes preferred over kerosene due to a lower incidence of fuel line clogging.

Naphtha is a crucial component in the production of plastics.

Alkylnaphthalene Sulfonates (ANS) are used in many industrial applications as non detergent wetting agents that effectively disperse colloidal systems in aqueous media. The major commercial applications are in the agricultural chemical industry, which uses ANS for Wet–able Powder and Wet–able Granular (Dry Flow–able) formulations, and the textile and fabric industry, which utilizes the wetting and de–foaming properties of ANS for bleaching and dyeing operations.

It has been used as a household fumigant. It was once the primary ingredient in “Mothballs”, although its use has largely been replaced in favour of alternatives such as 1,4–Dichlorobenzene (C6H4Cl2).  In a sealed container containing pellets, Vapors build up to levels toxic to both the adult and larval forms of many moths that attack textiles. Other fumigant uses include use in the soil as a “Fumigant Pesticide”, in attic spaces to repel animals and insects, and in museum storage–drawers and cupboards to protect the contents from attack by insect pests. It is a repellent to opossums. 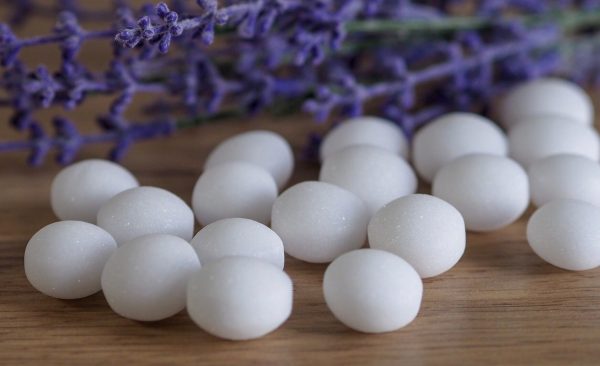 It is used in Pyrotechnic special effects such as the generation of Black Smoke and Simulated Explosions. It is used to create artificial pores in the manufacture of high–porosity grinding wheels. In the past, it was administered orally to kill Parasitic Worms in Livestock. Its Alkyl Homologs are the major constituents of Creosote. It is also used in engineering to study heat transfer using Mass Sublimation.