Sulphur is a chemical element with the symbol (S) and atomic number 16. It is abundant, multivalent, and Non–Metallic. Under normal conditions, it’s atoms form cyclic Octatomic Molecules with a chemical formula S8. Elemental Sulphur is a bright yellow, Crystalline solid at room temperature. Sulphur also is a vital nutrient for crops, animals and people. Over half of elemental sulphur production is traded internationally. China is the world’s largest importer, followed by Morocco and the United States. Canada is the largest exporter, followed by Iran, Russia and Saudi Arabia. Well over half of global sulphuric acid production comes from burning elemental sulphur at points of consumption, with most of the remainder produced at non–ferrous metals smelters and pyrites mines. East Asia, led by China, is the largest overall acid producer, stemming largely from rapid growth. It is followed by North America, Africa, and Latin America. Practically all traded acid is from smelters. Western Europe is the largest acid trading region, followed by East Asia and North America. 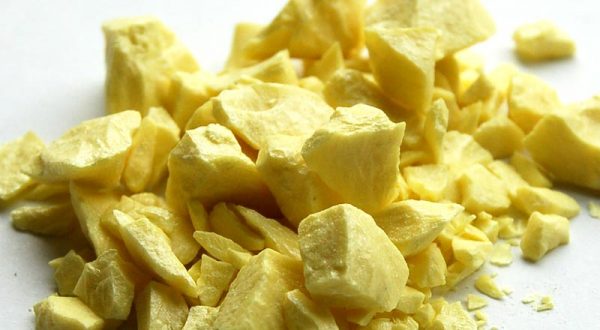 It is an essential element for all life, but almost always in the form of organosulfur compounds or metal sulfides. Three Amino Acids (“Cysteine” HOOC-CH-(NH2)-CH2-SH, “Cystine” SCH2CH(NH2)CO2H)2, and “Methionine“(M) and two vitamins (“Biotin or B7″ and “Thiamine or B1″) are organosulfur compounds. Many cofactors also contain Sulfur, including “Glutathione“, “Thioredoxin“, and “Iron–Sulfur” proteins. Disulfides, S–S bonds, confer mechanical strength and insolubility of the protein Keratin, found in outer skin, hair, and feathers. It is one of the core chemical elements needed for biochemical functioning and is an elemental macronutrient for all living organisms. It is one of the most important elements and is essential for life. Its an integral component of the world economy used to manufacture many products including several chemicals and fertilizers. It is also is a vital nutrient for Humans, Crops and Animals.

It combines directly with almost all the elements with the exception of gold (Au) platinum (Pt) and the noble gases. In its native form, it is a yellow crystalline solid. It can be found as a pure element or as sulphate (SO₄²-) or sulphide (S2−) minerals. The crystallography of sulfur is complex. Depending on the specific conditions, the sulfur allotropes form several distinct crystal structures, with rhombic and monoclinic S8 best known.

Powdered form of sulphur produced by sublimation; may contain up to 30% of the amorphous allotrope; used in rubber vulcanization, agricultural dusts, pharmaceutical products, stock feeds.

It is formed to a specific shape, such as prills, granules, pellets, pastilles, or flakes.

Sulphide occurs naturally in mineral ores, oil and coal deposits. Natural waters containing elevated concentrations of hydrogen sulphide (H2S) are used for therapeutic baths and have been consumed for medical purposes. Hydrogen sulphide, which exists as a colorless gas under normal conditions, has a characteristic odor of rotten eggs and occurs naturally in coal, natural gas, oil, volcanic gases, and it’s springs and lakes; H2S is a central participant in the sulphur cycle, the biogeochemical cycle on earth. Sulphides form an indispensable link in the sulphur cycle (the reversible interconversion of sulphide and sulphate) in nature. Petroleum refineries and gas processing plants extract H2S when making “clean fuels” and use it as a feed stock to produce sulphur and water.

It is in the form of a mixture of lumps and fines resulting from mechanical breaking of large blocks of solid sulphur; shipments may contain 50 wt % fines and lump diameters up to 20 cm or more.

It occurs in nature in the elemental form.

Pyrites (FeS2) are a common mineral comprised of iron and its compounds. Pyrites include a range of sulphide materials, such as marcasite (FeS2), pyrite, and pyrrhotite (Fe(1-x)S).

A roasting process to obtain metals from their ores; sulphuric acid is obtained from the process if sulphur dioxide is removed.

Prepared or refined grades of elemental sulphur that include amorphous, colloidal, flower, precipitated, wettable, or paste. 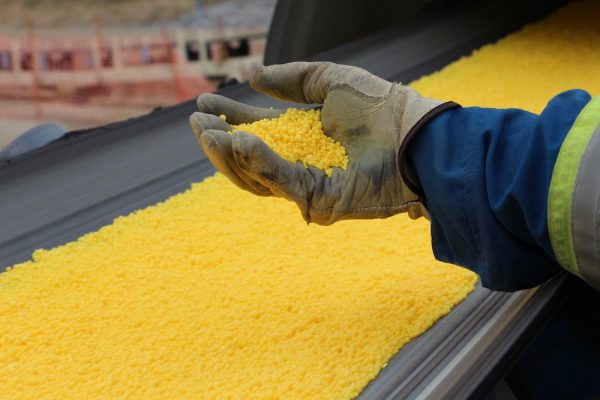 Also referred to as sulphurous anhydride, it has the chemical formula SO2. It is produced by volcanoes and in various industrial processes. Sulphur dioxide, which exists as a colorless gas under normal conditions, has a characteristic strong odor and is highly soluble in water. Its dioxide is used in many industrial processes such as chemical preparation, refining, pulp-making and solvent extraction and also is the feed stock to manufacture sulphuric acid. Its dioxide is also used in the preparation and preservation of food because it prevents bacterial growth and browning of fruit.

Sometimes referred to as the “king of chemicals,” sulphuric acid is a strong mineral acid with the formula H2SO4. It is soluble in water at all concentrations. Sulfuric acid has many applications, and is produced in greater amounts than any other chemical besides water. Principal uses include ore processing, fertilizer manufacturing, oil refining, wastewater processing, and chemical synthesis.

Sulphur in other forms (SOF)

It is in other forms include forms other than brimstone or pyrites, where it is produced in the form of sulphuric acid or other its compounds without prior refining to brimstone. Most SOF originates from the smelting of non–ferrous metals, led by copper (Cu), followed by zinc (Zn), lead (Pb), and nickel (Ni).

Sulphur in all forms 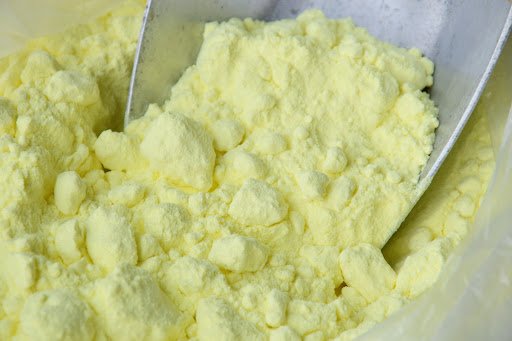 1.     The major derivative of sulphur is sulphuric acid (H2SO4), the highest production volume chemical, used as an industrial raw material. The largest single use of sulphuric acid is for the manufacture of phosphoric acid (H3PO4), a precursor to phosphate (PO₄³⁻) fertilizers and non–fertilizer phosphates.

2.    Sulphur and its derivatives are also used in: 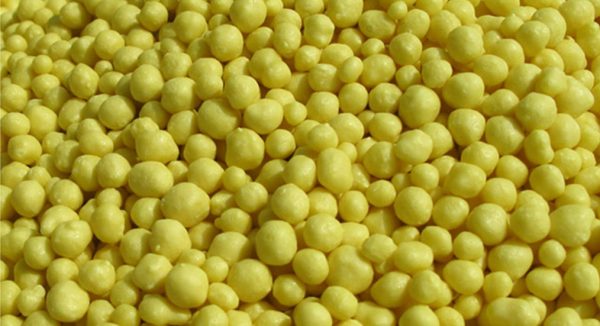