Gasoil (Diesel or D2) is a group of petroleum distillation products having boiling points between Lubricating Oil and Kerosene. The term originally referred to the product of oil gas works that was added to the product of coal gas works to produce improved illuminating gas. Small molecules like those in Propane, Naphtha, Gasoline for cars, and Jet Fuel have relatively low boiling points, and they are removed at the start of the fractional distillation process. The principal difference between GASOIL and D2 is the content of sulphur.

Gasoil Diesel (D2) is an abbreviation for Gas oil. It is the second distillate from the processing of crude oil. It can be used without reformers and additives. D2 has helped in a major reduction of wasted energy, pollution and waste. It can be used without reformers and additives. So, the first engines used D2 as fuel — before petrol cars as we know them today was invented. That is because the engine invented by a German called Diesel, requires no spark plugs. The diesel engine will ignite and combust when the pressure increases so that the heated “plug” makes it explode. Here we get the name “Diesel” — since the same principles are used in diesel engines today. However, automotive diesel that you fill has additives that the refinery will add to make the engine more efficient and also easier to start in the winter. Diesel changes “flash point” in the winter. It also has additives to absorb water that condense. If you use summer diesel in the winter, you will get better mileage, but your fuel pipes may freeze and can also burst, and the wax makes the diesel flow thicker.

Diesel Gasoil (D2) is any liquid fuel used in diesel engines, whose fuel ignition takes place without any spark, as a result of compression of the inlet air mixture and then injection of fuel. Truckers use Diesel #2 to carry heavy loads for long distances at sustained speeds because it’s less volatile than Diesel #1 and provides greater fuel economy. Diesel fuel also is measured by its viscosity. Diesel #1 flows more easily than Diesel #2, so it’s more efficient at lower temperatures.

It is heavy oil and it is created by a process of fractional distillation of petroleum. It is used as a fuel for automotive applications and in heating. Diesel engines are used worldwide due to higher thermodynamic efficiency and thus fuel efficiently. Gas oil, which is used in off–road vehicles is often called red diesel. Heavier petroleum products like diesel fuel and lubricating oil are much less volatile and distill out more slowly, while bunker oil is literally the bottom of the barrel; in oil distilling, the only things denser than bunker fuel are carbon black feedstock and bituminous residue (Asphalt), which is used for paving roads and sealing roofs. 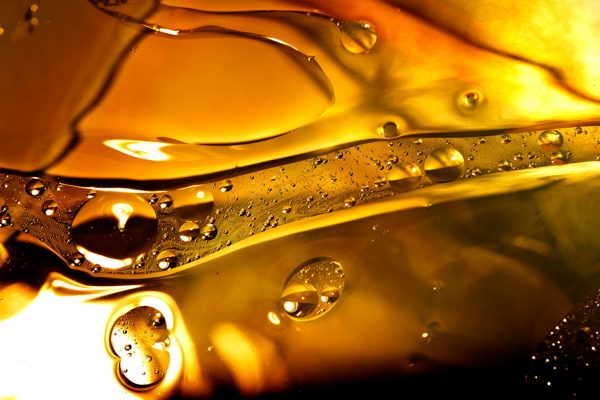 Gasoil (also known as fuel oil, heavy oil, marine fuel, bunker, or furnace oil) is a fraction obtained from the distillation of petroleum (crude oil). It includes distillates (the lighter fractions) and residues (the heavier fractions).

The term fuel oil generally includes any liquid fuel that is burned in a furnace or boiler to generate heat, or used in an engine to generate power. However, it does not usually include other liquid oils, such as those with a flash point of approximately 42 °C (108 °F), or oils burned in cotton– or wool–wick burners. In a stricter sense, fuel oil refers only to the heaviest commercial fuels that crude oil can yield, that is, those fuels heavier than gasoline (petrol) and naphtha.

Fuel oil consists of long – chain hydrocarbons, particularly alkanes, cycloalkanes and aromatics. Small molecules, such as those in propane, naphtha, gasoline for cars, and jet fuel (kerosene), have relatively low boiling points, and are removed at the start of the fractional distillation process. Heavier petroleum products like diesel fuel and lubricating oil are much less volatile and distill out more slowly, while bunker oil is literally the bottom of the barrel. In oil distilling, the only components denser than bunker fuel are carbon black feedstock and bituminous residue (asphalt), which is used for paving roads and sealing roofs.

The 305–82 version of D2 has lower sulphur content. The GOST 305–82 variant of Gas oil and D2 meets the ISO industry standards with a suplhur content of 0.2% maximum. This low sulphur content refers to Ultra Low Sulphur Fuel. D2 Oil GOST 305–82 also creates less pollution. Since 2006, nearly all of the petroleum–based diesel fuels available in North America and Europe have been of a ULSD type.