It is pure and inedible oil (Unbleached) which is extracted and produced from the pulp of fruit of palm. The color of pulp is red. That’s why crude palm oil is naturally similar to pulp color because of high inactive Vitamin A content. It is different from kernel oil or coconut oil. Commonly it is combined or mixed with coconut oil to make highly saturated vegetable fat, which is also used for cooking purposes.

Main usage of crude palm oil is for cooking purposes and is largely used in South–East Asia, West Africa and some parts of Brazil. Commercial kitchens use it due to its low cost. It’s not healthy as its counterparts due to high content of saturated fats. Largest producer of CPO is Indonesia, Malaysia, Nigeria and Columbia. They are major exporters of palm oil.

Crude palm oil, like all fats, is composed of fatty acids, esterified with glycerol. Palm oil has an especially high concentration of saturated fat, specifically the 16–carbon saturated fatty acid, palmitic acid, to which it gives its name. Monounsaturated oleic acid is also a major constituent of palm oil. Unrefined palm (Unbleached) oil is a significant source of Tocotrienol, part of the vitamin E family. Red palm oil is rich in carotenes, such as αlpha–carotene, ßeta–carotene and Lycopene, which give it a characteristic dark red color. However, palm oil that has been refined, bleached and deodorized from crude palm oil (called “RBD palm oil”) does not contain carotenes.

Palm oil is naturally reddish in color because of high ßeta–carotene content. It is not to be confused with palm kernel oil derived from the kernel of the same fruit or coconut oil derived from the kernel of the coconut palm (Cocos nucifera). The differences are in color (Raw palm kernel oil lacks carotenoids and is not red), and in saturated fat content: Palm mesocarp oil is 49% saturated, while palm kernel oil and coconut oil are 81% and 86% saturated fats, respectively. However, crude red palm oil that has been refined, bleached and deodorized, a common commodity called RBD (refined, bleached, and deodorized) palm oil, does not contain carotenoids. Many industrial food applications of palm oil use fractionated components of palm oil (often listed as “modified palm oil”) whose saturation levels can reach 90%; these “modified” palm oils can become highly saturated, but are not necessarily hydrogenated.

The oil palm produces bunches containing many fruits with the fleshy mesocarp enclosing a kernel that is covered by a very hard shell. The Food and Agriculture Organization (FAO) considers palm oil (coming from the pulp) and palm kernels to be primary products. The oil extraction rate from a bunch varies from 17% to 27% for palm oil, and from 4% to 10% for palm kernels.

Along with coconut oil, palm oil is one of the few highly saturated vegetable fats and is semisolid at room temperature. Palm oil is a common cooking ingredient in the tropical belt of Africa, Southeast Asia and parts of Brazil. Its use in the commercial food industry in other parts of the world is widespread because of its lower cost and the high oxidative stability (saturation) of the refined product when used for frying. Many processed foods either contain palm oil or various ingredients made from it. 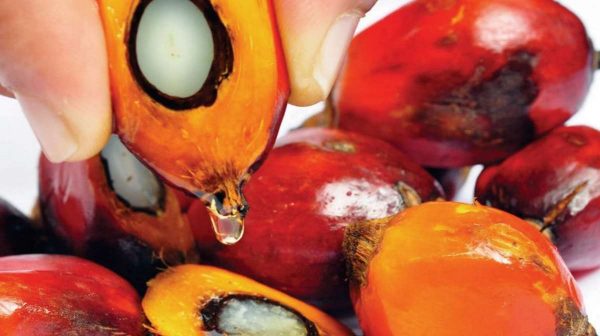 Since the mid–1990s, Red Palm Oil has been cold–pressed from the fruit of the oil palm and bottled for use as a cooking oil, in addition to other uses such as being blended into mayonnaise and vegetable oil.

The highly saturated nature of palm oil renders it solid at room temperature in temperate regions, making it a cheap substitute for butter or hydrogenated vegetable oils in uses where solid fat is desirable, such as the making of pastry dough and baked goods. The health concerns related to tans fats in hydrogenated vegetable oils may have contributed to the increasing use of palm oil in the food industry.

Palm oil is also used in animal feed. In March 2017, revealed that palm oil is used to make milk substitutes to feed calves in dairies. These milk substitutes contain 30% milk powder and the remainder of raw protein made from skimmed milk powder, whey powder, and vegetable fats, mostly coconut oil and palm oil.

Significant amounts of palm oil exports to Europe are converted to biodiesel. In 2014, almost half of all the palm oil in Europe was burnt as car and truck fuel. As of 2018, one–half of Europe’s palm oil imports were used for biodiesel. Use of palm oil as biodiesel generates three times the carbon emissions as using fossil fuel, and, for example, “biodiesel made from Indonesian palm oil makes the global carbon problem worse, not better.”

The organic waste matter that is produced when processing oil palm, including oil palm shells and oil palm fruit bunches can also be used to produce energy. This waste material can be converted into pellets that can be used as a biofuel. Additionally, palm oil that has been used to fry foods can be converted into methyl esters for biodiesel. The used cooking oil is chemically treated to create a biodiesel similar to petroleum diesel. 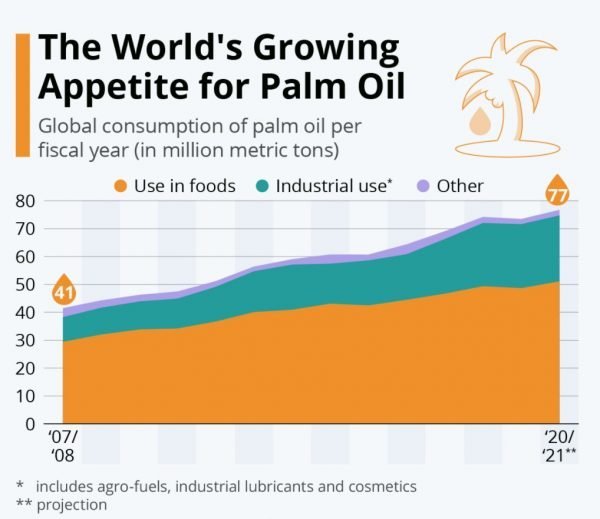